That was the year Marc Van Peteghem and Vincent Lauriot Prévost set up VPLP, having met at the Southampton school of naval architecture.

Their first model was a fifty-foot foiler, designed by Vincent Lévy and named the Gérard Lambert after the hero of a song by Renaud. She arrived 11th in her first race, the La Baule–Dakar.

The firm’s internationally renowned team, comprising naval architects, engineers and designers, works all over the world on projects to build sailing and motor vessels. 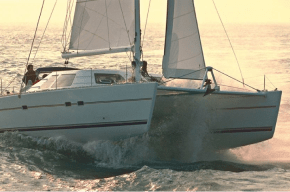 1997 First victory in the Jules Verne Trophy with Sport Elec. Built by the CDK yard for Olivier de Kersauson, this 23m trimaran had an eventful career, achieving notably the fastest solo circumnavigation of the time (2004) with Francis Joyon at the helm. 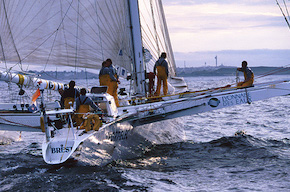 2011 Launch of the Hemisphere, the largest sailing catamaran in the world. Fitted out with six vast and comfortable cabins for up to twelve passengers and manned by a crew of ten, this giant of the seas is 44.2 m long and carries 1,100 m² of sail on a reach. 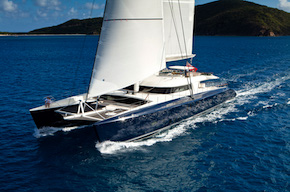 2017 Aboard his Ultim Macif, designed by VPLP Design, François Gabart sets a new solo round the world record of 42 days, 16 hours, 40 minutes and 35 seconds. Starting in 2011, VPLP’s collaboration with one of the greatest sailors of his generation continues to this very day with the SVR Lazartigue, his latest trimaran launched in July 2021. 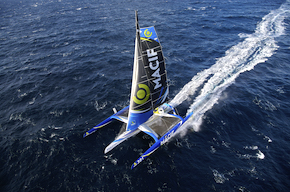 1990 First victory in the Route du Rhum with Florence Arthaud on Groupe Pierre 1er, a Formule 40 with one wing mast, three hulls, a maximum length of 18.28 m, three rudders and an unforgettable sunset finish to its name. 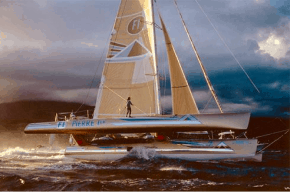 2010 USA 17, the 90’ trimaran of the American challenge BMW Oracle wins the 33rd America’s Cup. For VPLP, as the chief designer, this was the most fruitful and intense project the firm had thus far worked on. Much of the firm’s innovations in foils and rigid wingsails come from this experience. 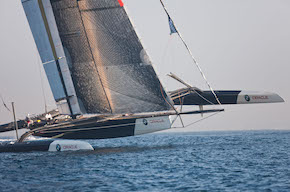 2013 First victory in the Vendée Globe with François Gabart on the IMOCA Macif. Like many of its contemporaries, this sixty footer designed in collaboration with Guillaume Verdier would go on to have a wonderful career with two consecutive wins in the Route du Rhum. 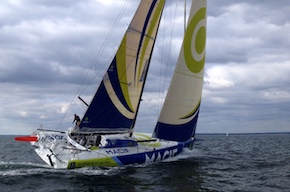 2019 Inauguration of VPLP’s Maritime Division and commissioning of the Canopée, a 121-metre vessel with wingsails designed by VPLP Design to carry components of the Ariane rocket from mainland France to French Guiana. A major milestone in the development of the firm. 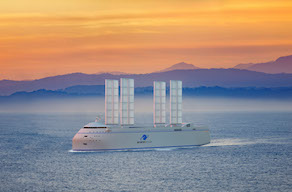 A multidisciplinary team,
a cross-functional organization

At VPLP Design we believe in the value of confronting different points of view. We are convinced that an effective design can only be achieved by putting together different skill sets.

The men and women at the firm, whether they be architects, engineers, designers or modellers, work cross-functionally on all the various projects managed by the Racing, Yachting and Maritime Divisions.

This valuable resource, when combined with our experience, enables us to innovate continuously in the world of sailing and motor boats.

At VPLP Design we subscribe more than ever to Enzo Ferrari’s famous maxim: “The team has replaced the lone genius.”

No profile to show
Department
Location